Now that I’ve poked around the software side of things on my DM 200 modem, it’s now time to poke some hardware!

For more posts on this, see below

First things first, get the case open. Happily, there’s a very obvious screw on the back of the case, and a standard TR8 torx screwdriver removes it. The next bit was less obvious, but I had the openwrt website to help out. I used some picks from my ifixit repair kit to pop open the side of the case, and voila, the PCB was revealed.

Popping open the side 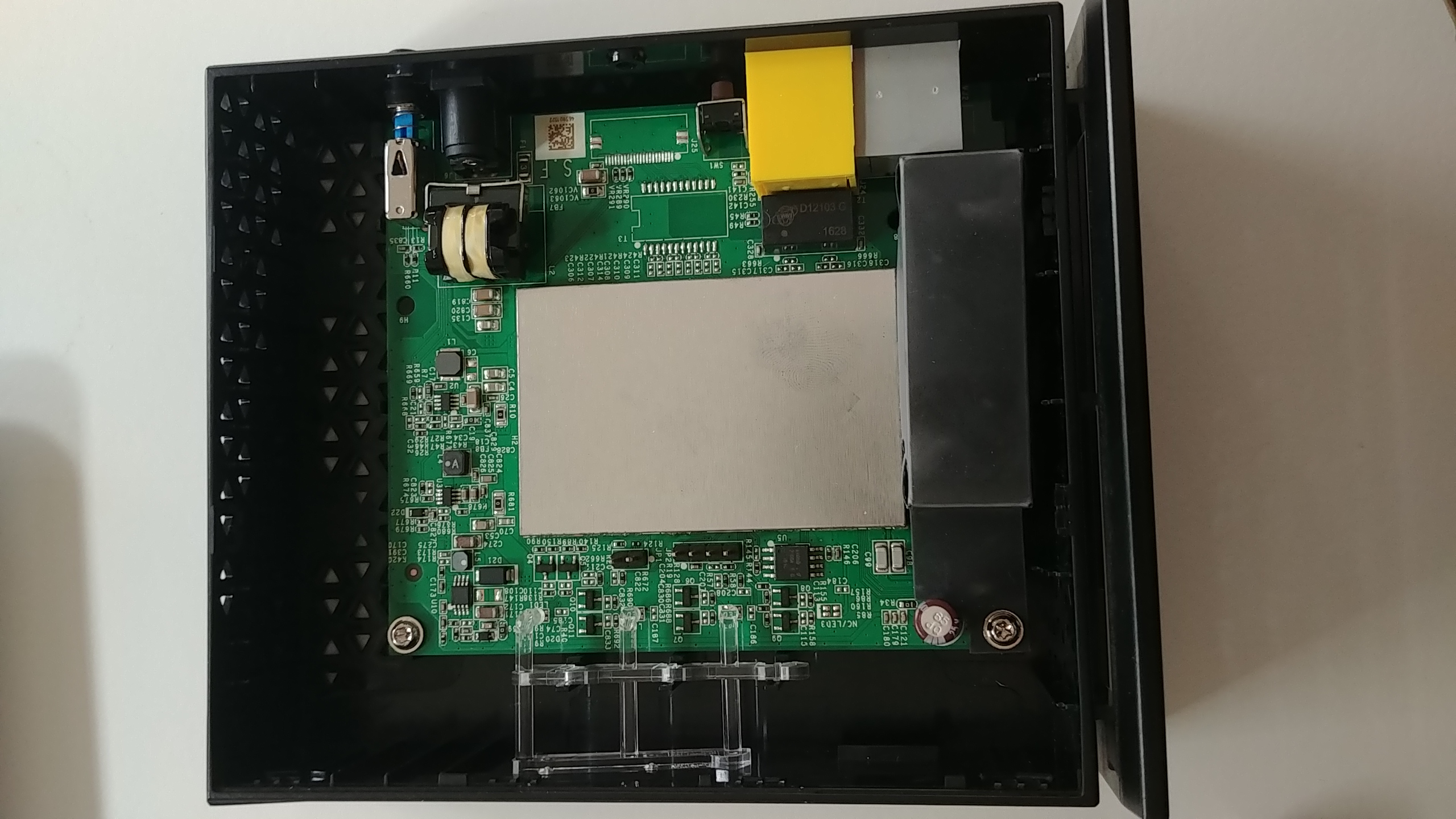 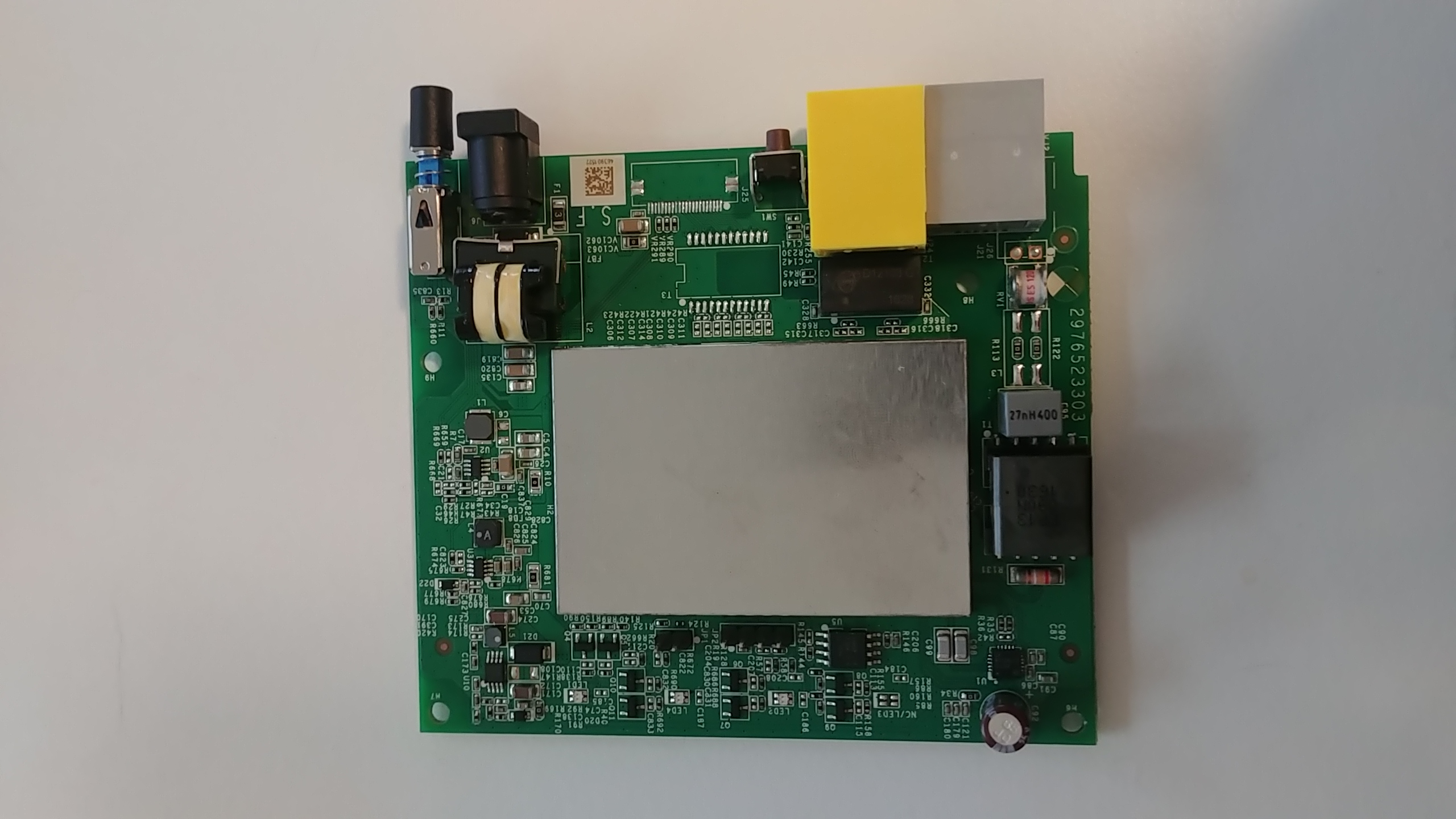 Front of the PCB 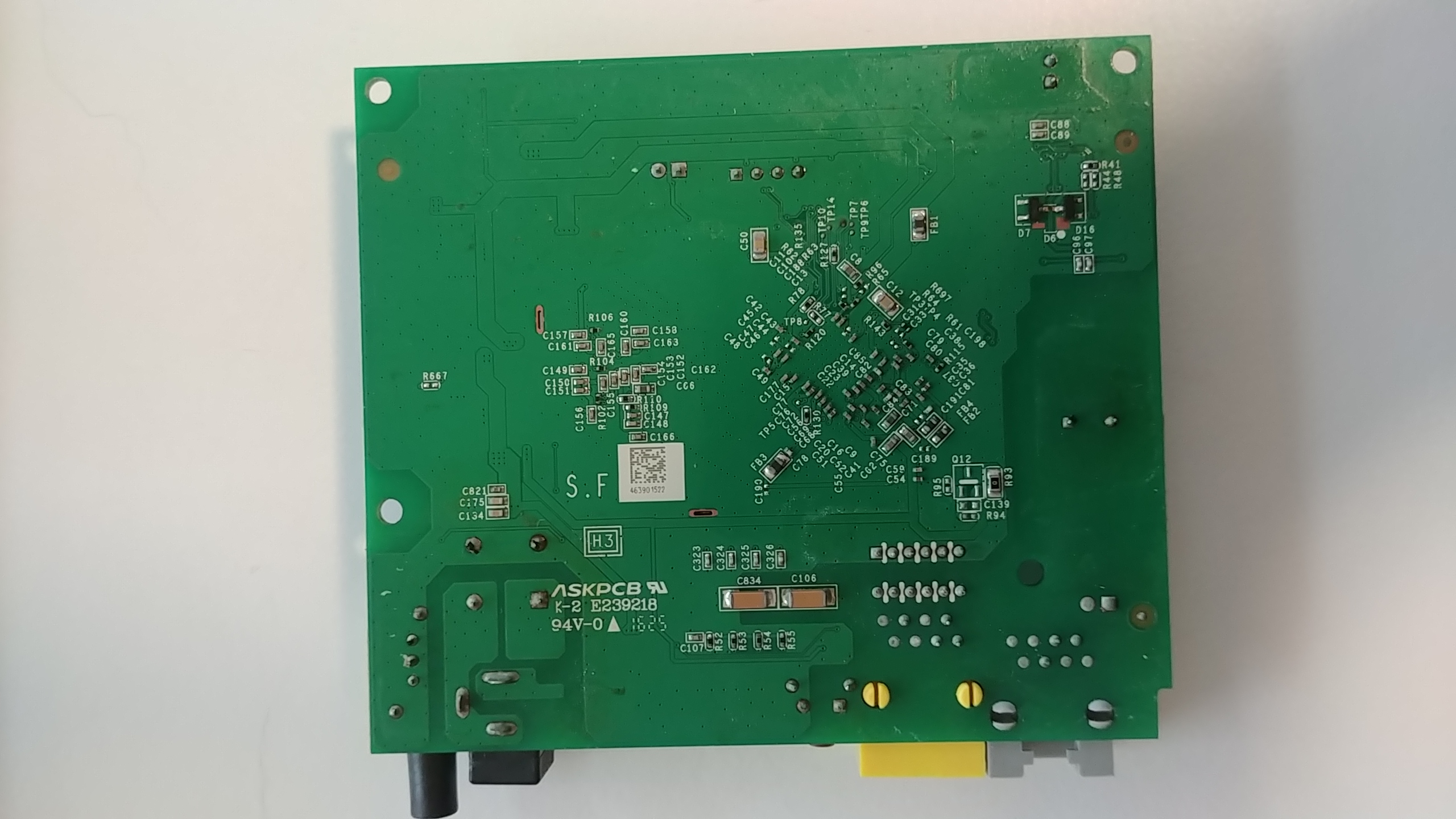 Back of the PCB

Before I could remove it from the case, I had to remove some clear molded plastic clipped over the top of it. The plastic redirects the LED lights from the board to the outside of the case, which feels very clever and very simple, a sign of good design in my books. Once that’s taken out, the board is secured by two more screws, also TR8, and then the board is freed. The first obvious thing is the huge metal box, soldered into the middle of the board. I would guess that it’s ground for the board, since all electronics need a ground. And possibly it doubles as protection for some more sensitive chips? Looking at the back of the board, I can see things are soldered in underneath the metal casing, so that seems to support my hypothesis. I’m immediately tempted to try to desolder it to see what’s underneath, but I’m trying to minimize potential damage for now, so I’ll leave that for another time. The next interesting thing is all these IC chips with mysterious letters and numbers stamped on them! I have a vague understanding you can find the chips based on these serial values, and then get the chip documentation online, which tells you what they do. So, lets start doing that!

First, this rather large-ish chip that says “Winbond” in large letters. 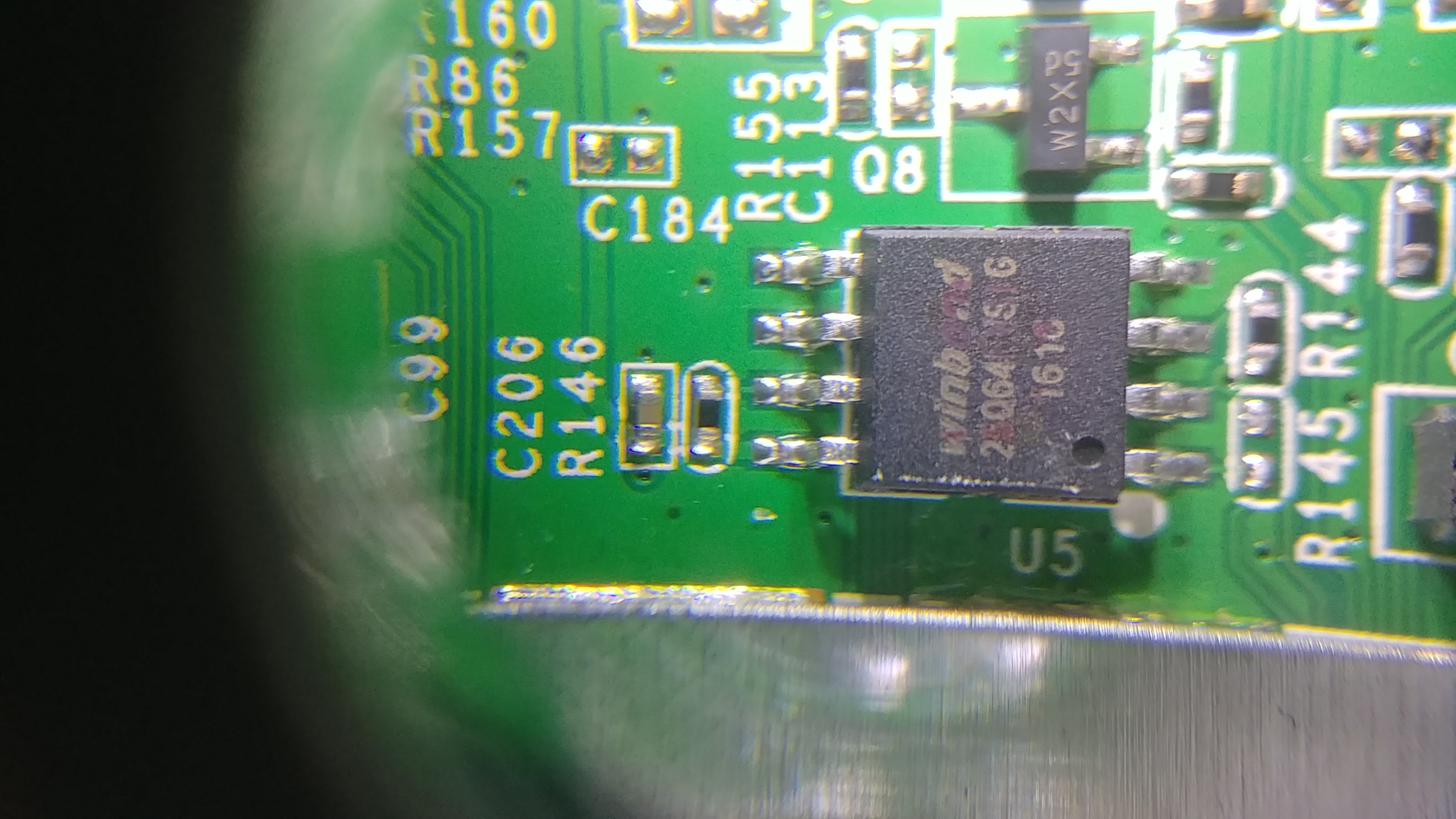 From what I can tell it’s an 8-pin chip, and the writing is “Winbond 25064 FVSIG1618”. It’s a bit roughed up as you can see, so I’m kind of guessing, but that seems a good initial thing to google. After searching around a bit, I discover it may actually be W25Q64FVSIG, so that’s a Q, not a 0 like I thought. Jotrin has the product part (https://www.jotrin.com/product/parts/W25Q64FVSIG), but won’t give me the data sheet without making me sign up with them. Rude! Happily, datasheetq.com has no such rules, and I found the data sheet there as well: https://www.datasheetq.com/datasheet-download/840460/1/Winbond/25Q64FVAIF

The datasheet shows that it’s a particular type of W25Q64FVSSIG chip. Which is different from what the marking on the chip said. Searching through the datasheet, I found that a top marking of 25Q64FVSIG, means it is in package type SS in a SOIC-8 208mil form factor.

Now that I know all the fancy numbers, what the heck is it? It’s a flash memory, used to store, well, something, that they want to keep even when the power is off (flash is non-volatile, so it remembers things even with the power off). The datasheet says the chip operates on a single 2.7V to 3.6V power supply. It also says it supports SPI communications. I have a ch341a that I got from the Wild West Hackin’ Fest last year, and it supposedly can read 25 SPI flash with 8 pins. So I believe I could copy everything off the chip and see what’s on it? I see another project for me soon…

But before I get too deep with this chip, there’s still a couple others that look interesting. 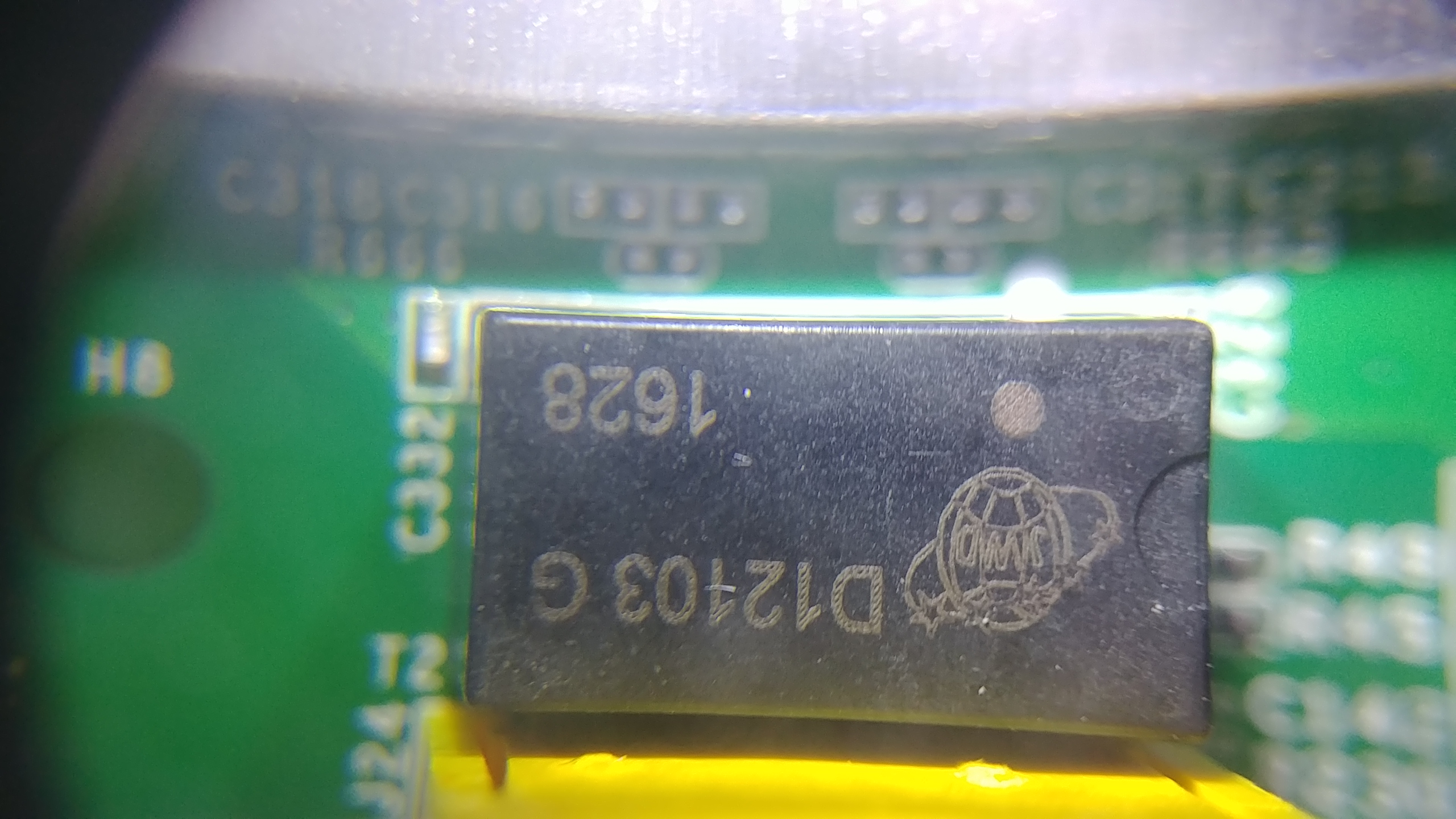 This chip is rude and doesn’t have a name!

Instead of a useful name branded on it, I get a JWD on a globe with stars. I had earlier stumbled across some IC identification websites, the main one being https://www.elnec.com/en/support/ic-logos/?method=logo, but no dice. After googling around a while, I finally found it at https://lcsc.com/brand-detail/12354.html. It says it’s the logo for Sichuan Jingweida Technology Group Co., Ltd. It also gives the list of its products:

However, searching for D12103 G 1628 on the chip didn’t yield any datasheets or more info than that. I did find the company website and browse around there, but it seemed a dead end http://www.myjwd.com/. Since this chip is right by the ethernet plug, I’m guessing it’s a network transformer or filter network interface mentioned on the lcsc website.

Enough googling, I want to try to fry some electronics! Well, actually that’s the exact opposite of my goal. But I do want to connect directly to the PCB using the handy dandy pin out that they left on the board. I used two other blog posts, https://jcjc-dev.com/2016/04/08/reversing-huawei-router-1-find-uart and http://www.devttys0.com/2012/11/reverse-engineering-serial-ports/ as my guides. The pin out has 4 pins, so I’m guessing it’s a UART port that was used for developers when working on the board.

The two blog posts I linked to above give ways for determining which pin is which. One of the tricks they give is shining a flashlight through the board. This way, you can actually see the connections each pin has, and use that as an initial guess. 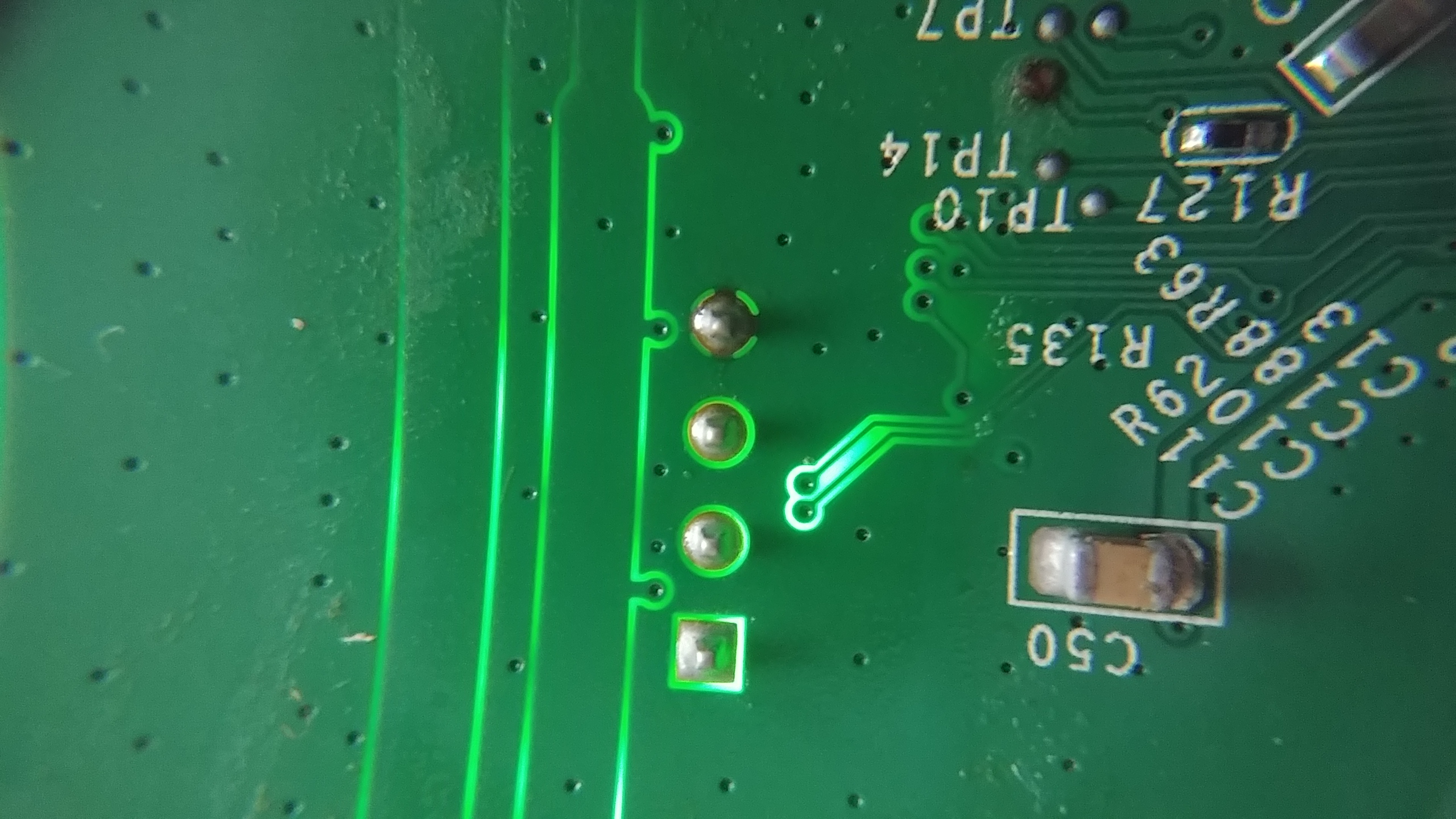 It certainly doesn’t look like the pins in the other blog! There’s a square connection, two circles, and one that looks to have a dark line at the top, bottom, and sides. If it is a UART connection, then the two circles that look similar are probably the Rx and Tx pins, with the wonky looking ones are the ground and power. But how to find out which ones are which?

It’s time for some multimeter use!

First, figure out which pin is ground. My theory is that the large metal cover on part of the PCB is doubling as ground for this device. Why have a huge chunk of metal in a device if you’re not using it as ground? So that means I can use my multimeter’s continuity test to see which of the pins connects to the metal cover, and that’ll be my ground!

NOTE: a continuity test on a multimeter sets it so the multimeter will make a loud beep noise when the two probes are electronically connected to each other. You can touch the probes together directly to hear the noise, or, more usefully, two points on a piece of electronics. If it beeps, there’s a way for electricity to flow from one probe location to another. Useful for making sure electricity can even flow at all in your projects!

Touching each of the pins, from left to right in the picture, gave me the following results:

I’ve found ground! The fourth pin, with connections in all four directions, is the ground. The short blip from the first pin was weird, but the blog posts mention that this can happen when you try to do a continuity test on the power pin. So tentatively, it’s power.

That’s about as far as I can go without powering on the modem. It’s time to turn it on! Hopefully the magic smoke stays on the inside. I can still use my multimeter for this. Multimeters excel at measuring voltage (that’s kind of their main function), and the whole point of UART is bouncing voltage up and down on the transmitting pin in order to send data. So the plan: Connect my multimeter up to the non-ground pins one by one, and watch the voltage amount on my multimeter. If there’s one that fluctuates a lot, that’s probably the transmit pin. According to the blog post http://www.devttys0.com/2012/11/reverse-engineering-serial-ports/, most data is sent when it first boots up. So I’ll be turning the modem off between each test. I also want to be monitoring the multimeter’s screen, not staring at the probes I’m holding on very tiny pins. So I grabbed some double sided alligator clip wires, to clip to the pins and the probes. And the board needed to be held steady, so I grabbed my third hand, and connected everything up. After all this setup, I was ready to go! 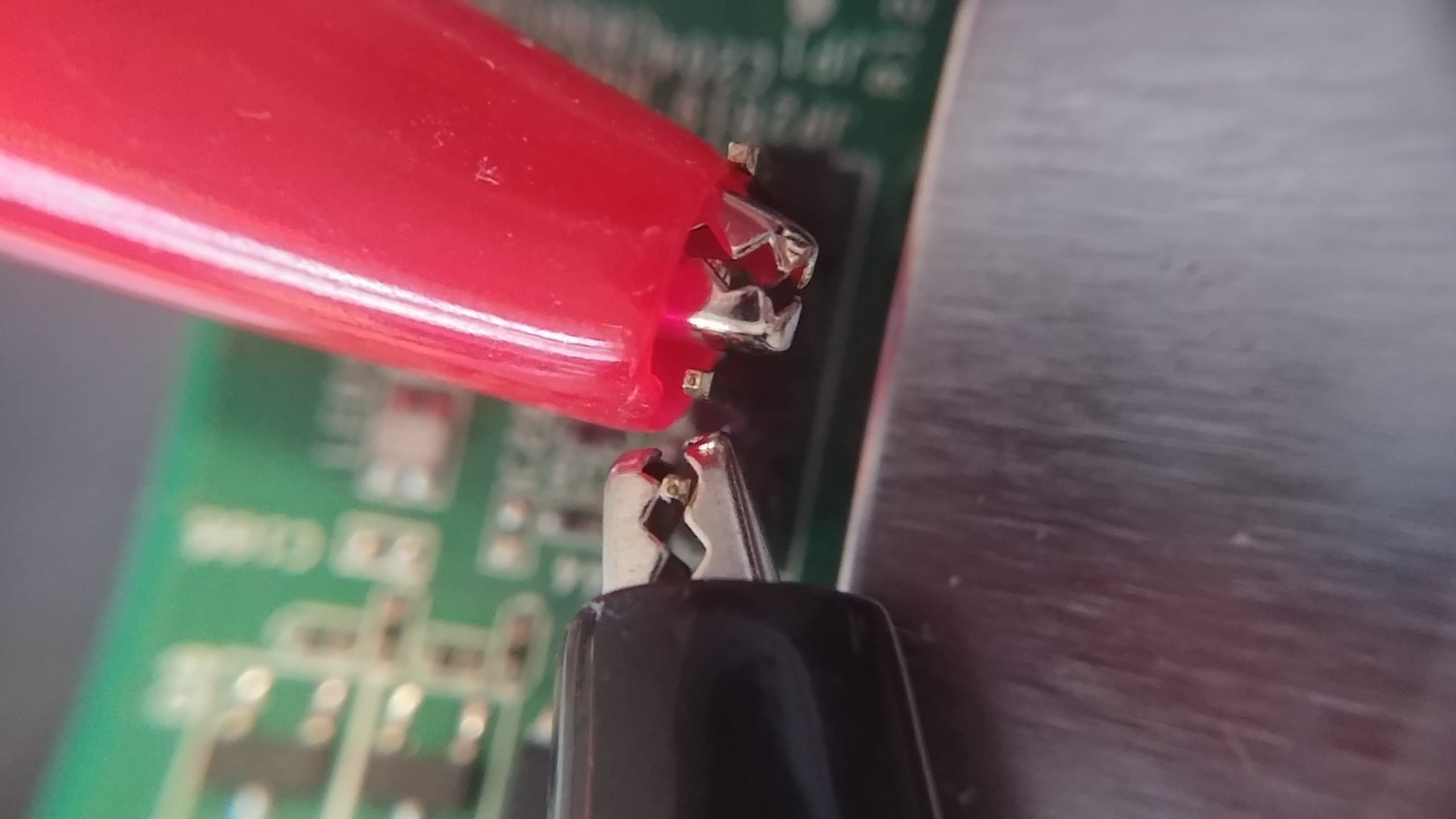 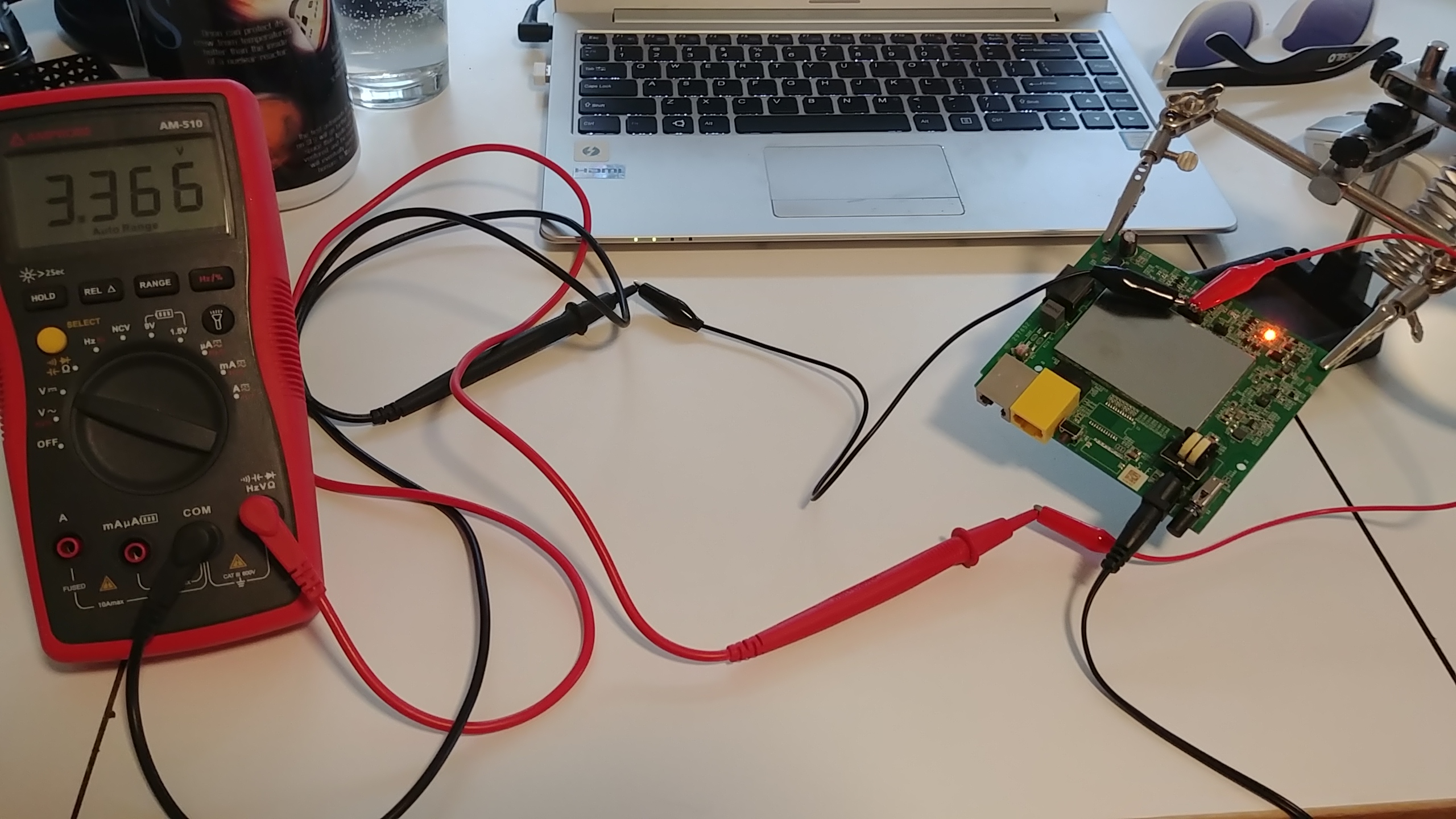 Going pin by pin, I got the following results:

By guessing the Tx and Rx pins will have the same trace patterns, I came up with a final result:

Now that I’ve done all this, I need to actually connect to the pins. Luckily, I have a bus pirate just sitting around, which supports UART communications!

I may do a separate post later about how I did initial set up for the bus pirate. I used the graphic at https://learn.sparkfun.com/tutorials/bus-pirate-v36a-hookup-guide to figure out which color wire should connect to which pin on the modem.

I don’t need to connect the power pin because I won’t be powering the modem, I’ll let it stay plugged in like normal. 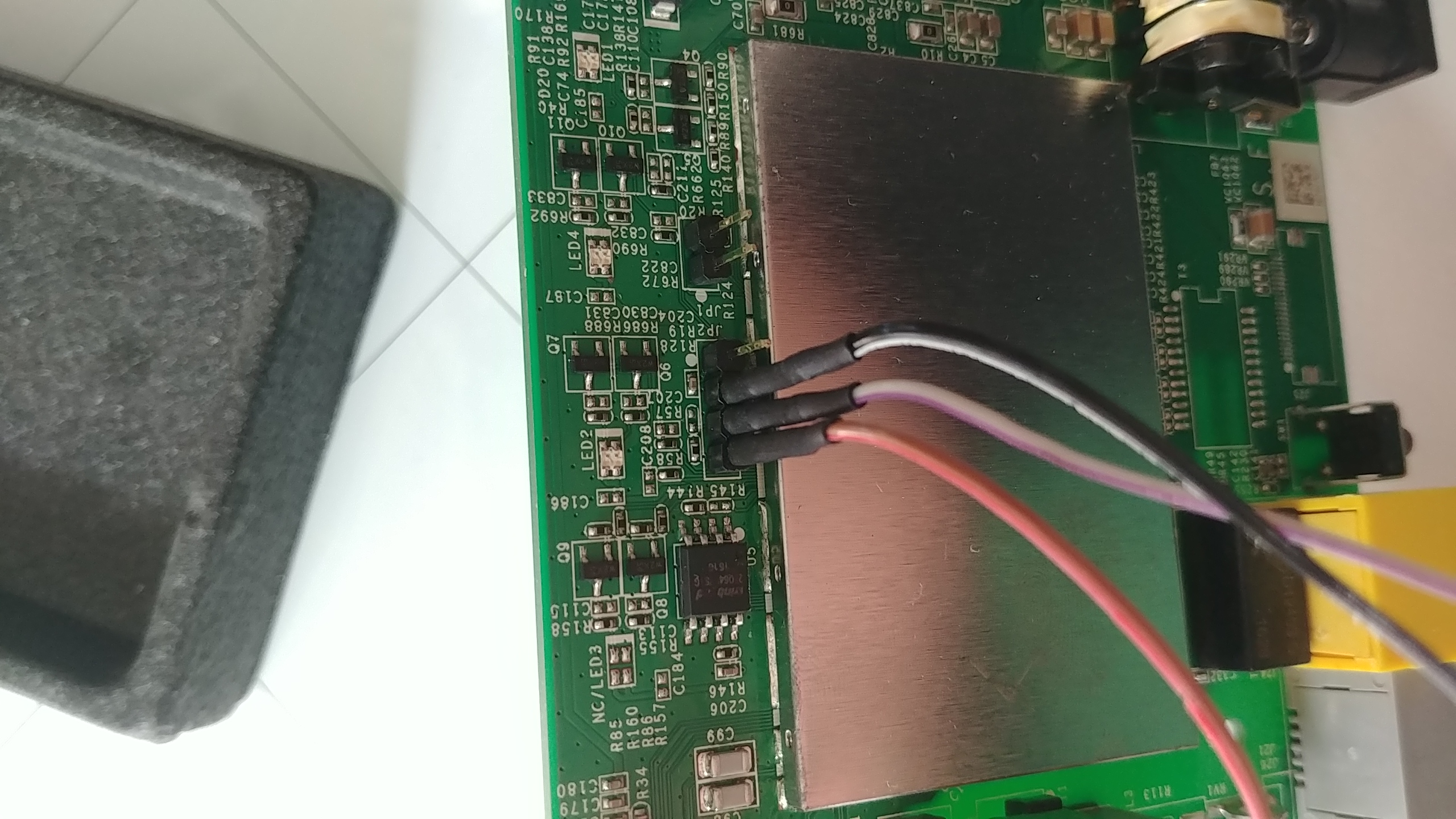 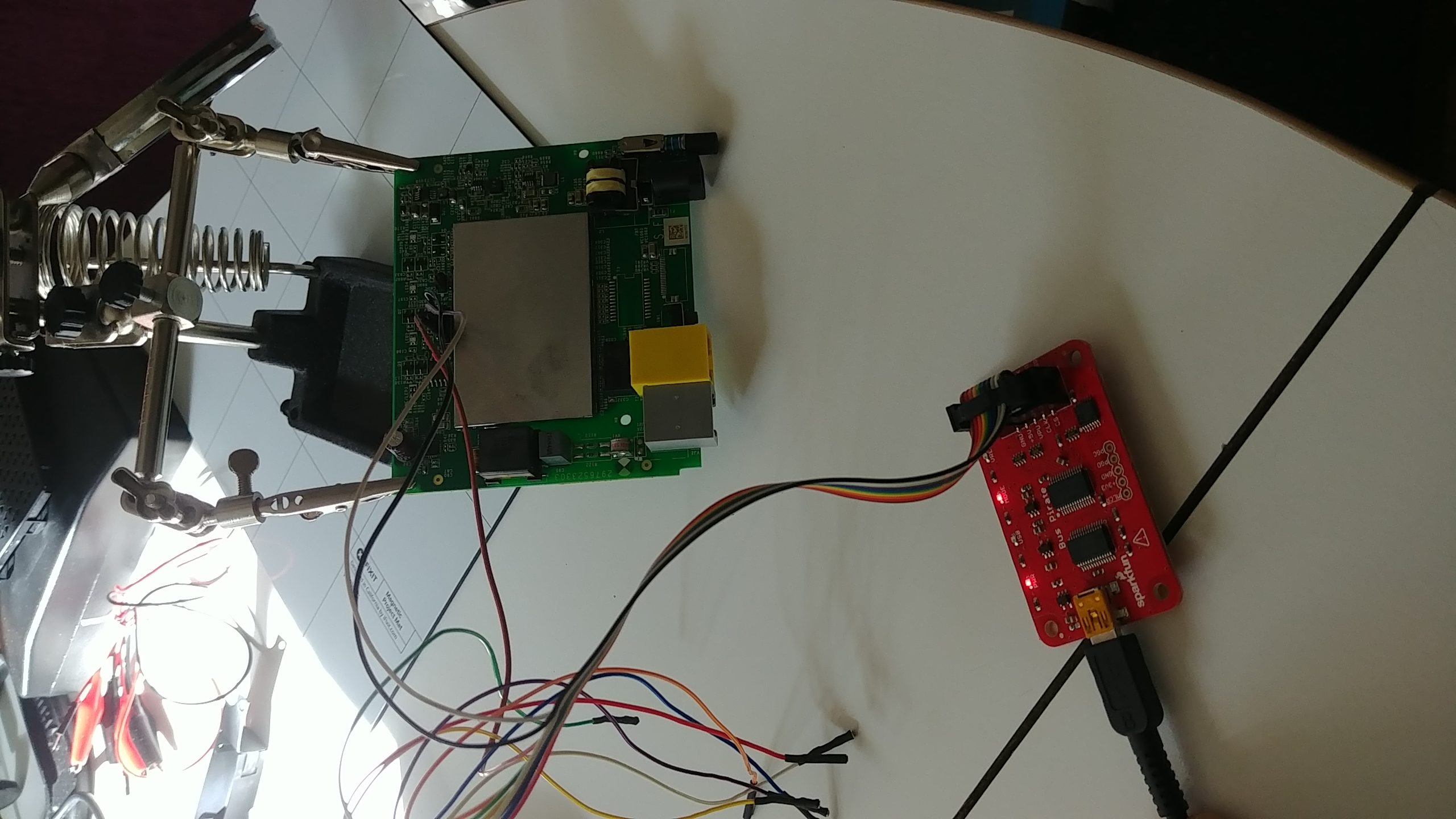 One last aspect of UART is that it has a specific baudrate that different UART connections use to communicate. How do you know which rate to use? Well, you don’t. There’s a bunch of standard ones, though, so I guessed during the setup of my bus pirate, and managed to get it right the first try!

With the bus pirate plugged into my computer, I used the screen command to connect to it.

NOTE: when using screen, you can enter Ctrl+a then H to log output of screen into a screenlog.0 file. I did this so I can review all the output of the modem later

In bus pirate, I changed the mode to UART and set connection requirements. Once that was done, I turned on the modem and waited for something to happen. Below is a capture of the screen while setting up, then what happens once it’s turned on (bus pirate set up ends with the line that just says “Ready”)

It works! Cue dancing around and pumping my fists victoriously. Now, I have no idea what to do with all this info spewing on my screen, but this is the first time I’ve done any sort of reverse engineering of hardware, so I think I deserve to celebrate.

After I let it continue to spew mysterious log info for a while, it finally settles down, and gives me root busybox access! However, it’s not all fun and games. The modem is not happy about not being able to complete the PPPoE discovery, and periodically just throws it into my shell as I try to type. I tried a few commands, but got a bit annoyed at the extra info popping up.

NOTE: PPPoE stands for “Point-to-Point Protocol over Ethernet”. It’s used by most DSL providers for authentication and encryption purposes. It’s for sending packets to the ISP’s network before going to the rest of the internet, from what I can tell on wikipedia.

This is a DSL modem, and it’s not connected to any internet, so I’m guessing that’s why it fails. I could potentially work around that, but honestly, I’m not sure what all I can do from here, so I’m leaving it alone. Here’s the output of the shell and my attempts at playing around.

There you have it, my first hardware reverse engineering adventure! I certainly learned a lot about datasheets, integrated circuit logos, some cool ways to use multimeters, basics of how a router/modem is set up, UART, AND basics of using bus pirate. Whew!

This was super fun, and slightly nerve-wracking, which I think means it’s something I should do more of. My other pieces of hardware are no longer safe from my prying eyes and screwdrivers!